Bitcoin crash and bounce 100x faster than Black Monday. Is this the birth of a monster?

We've been waiting all of three and a half weeks since the Cyprus 'lost weekend' bailout. The Zeitgeist-currency Bitcoin has bubbled and burst. Its value is arbitrary, set by a continuous market. It does not even have the aesthetic value of gold or diamonds.

Even better than diamonds for gangsters and oligarchs to move millions around, a Bitcoin account looked the obvious stealth wheelbarrow of choice. 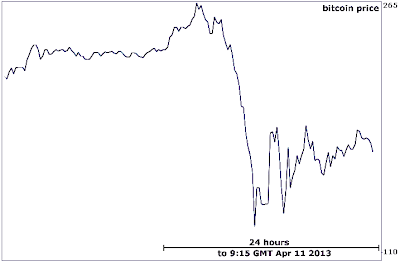 From (already) an all-time high of $47 on 16 April, Bitcoin raced to $265 yesterday before halving in hours. It then bounced like the bonnet of a Cuban Cadillac on a speed bump. Even if Russian billionaires had not been liquidating Cypriot bank accounts and buying Bitcoins, the belief that they might do so has fulled the speculative Bitcoin market.
The total value of the Bitcoins went over £1bn to peak at $2.5bn.
In 24 hours it has crashed and bounced three times.

Compare this to the biggest and fastest stock crash our our era, Black 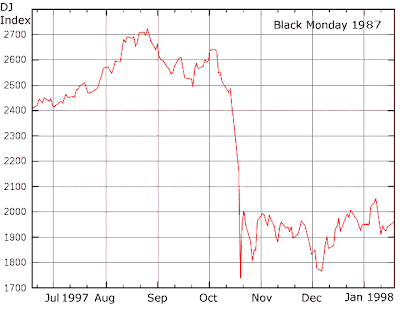 Monday. The chart is the most similar I found but the timescale is two-orders of magnitude longer. Admittedly the Dow took only days to fall almost half but the subsequent oscillation was measured in months.

According to IG Markets there's "a waiting list of over 10,000 to open an account with the primary bitcoin exchange, Mt.Gox".

The birth of a monster?

The number of Bitcoins in circulation is 11m and is capped at 21m. They can be created by 'mining' but this is deliberately a slow process. At the all time high of $265, 21m Bitcoins would be worth $5.5bn. Even a complete wipe out would not register on Goldman's Vampire Squid global crisis meter.
It's not widely realised even now, but the subprime mortgage collapse destabilised the whole banking world because the derivative market in mortgage backed securities was 100s of times greater than the real value of all subprime mortgages. As the peerless account of the credit crunch, The Big Short relates, there was not enough subprime in the world for the bankers to gamble with so they simply created new markets of arbitrary size using synthetic CDOs.

You can already bet on Bitcoins. IG Markets offers binary bets on what the value will be on May 31. If this carries on, a future Bitcoin crash (and they will happen) might cause losses of $100bn, $1tr, who knows?

And if you want to speculate on Bitcoins, my advice is don't.
Posted by MrContrarian at 05:25