Insights and tips from the UK Investor Show: The Long, the Short & the Wide 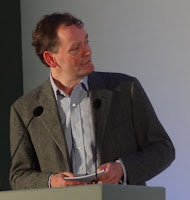 Most of the notes I wrote during Tom Winnifrith's UK Investor Show will remain in my book since Paul Scott has made far better write ups of fund manager Mark Slater's presentation (excellent as always) than I could. You'll find them on Stockopedia: Pt1 and Pt2.

Shares mentioned in this blog

Tom conducted an interesting interview with small cap investor Nigel Wray and property developer Nick Leslau. Both are sure Britain's economy is heathier than the media, particularly the BBC, portrays.

"The UK is doing a great deal better than we're being told. A lot of companies are being created, there's real energy out there."

House prices are too high according to the property man. Buy-to-let is dangerous, particularly in London. "Overseas buyers see London as a safe place to be" but it could go sour for instance if a new Gov't made a tax raid on non-doms.
Wray was not as negative, venturing that London & SE will continue to outpace the rest of the country and "There are houses in the south east worth buying."

Whole rows of high street shops were unanimously condemned, if not to demolition, at least to residential conversion. Tesco et al bully local councils to allow new superstore sites by playing them off against neighbouring councils, threatening to close stores and move.

There are plenty of walking wounded chains who will pre-pack shrink themselves on the next blow. In a few years all you'll be doing is sipping a Starbucks while you plan whether to buy more shoes/clothes/bling in the boutiques.


The magic of franchising

A lot of Wray's fortune has come from his Domino's Pizza (LSE:DOM) holding, "The most predictable business I've ever been involved in." The outlets have remained 100% owned by franchisees, against his early expectations. That has helped the company's growth since a franchise owner will run the stores better than HQ ever could. It's a tough business late at night when the weirdos and drunks turn up. Wray is slicing his stake only because, at £1bn cap, Domino's no longer has the exponential growth potential he looks for.

"Buy good small companies, on modest PEs, where directors own a meaningful percentage of shares."

He did mention Alliance Pharma (AIM:APH) where he is a 15% holder. I've noticed over the years that he does talk his own book.

short shrift, and particularly how to avoid disasters in these unlimited downside plays.
Miers finds short selling comes to him more readily than ownership simply because he finds it easier to spot companies that will fail than those than will win, especially in smallcaps.


Market timing and God save us from QE

Shares are being pushed up by negative real interest rates. "People think they are smart enough to see the warning signs and get out." They are deluded. History shows that optimists claiming QE will not end badly are wrong. The consensus is that QE countries will gradually inflate themselves out of trouble. In fact we will probably see a sovereign debt crisis.

He also added one for the watchlist: Quindell Portfolio (AIM:QPP). It ticks all the boxes but it's too soon to short. The cap is £485m. The CE tweets every time a broker buy note comes out. The website is more focussed on pushing up the share price than explaining what the business does.

I caught the end of a ding dong between the alarmingly large but charmingly civil bear Evil Knievil (Simon Cawkwell) and the CE of advfn.com, Clem Chambers. Evil said he did not know why he got ASOS (AIM:ASOS) so wrong - his short has cost £250k so far (and that's not his most expensive mistake by a long shot).

And so on twice more. It was more of a heckle than help and Evil had had enough (and so had I). Being a bear of good manners he merely said "Please desist" but I'm sure the words in his head were shorter than that.

Evil's latest long tip is Juridica Investments (AIM:JIL) which is throwing off cash. I looked at this share a month ago. It has very tasty value ratios but the corporate governance* is unacceptable to me.

Evil's short tip was also Cupid (AIM:CUP) which to my amazement he called "a fraud, and I'm prepared to take a writ on Monday."
Find out why Cupid is a hot potato from these tweets.


* Juridica's funds are managed by a 36% owned company, Juridica Capital Management Limited (JCML). JCML charges its parent hedge fund type fees: 2.5% flat plus a performance fee that starts at 20%. This climbs in steps up to an incredible 50% of the increase in adjusted NAV. There is a hurdle but still. Oh and all three of JCML directors/managers are directors of Juridica. Why don't they just work full time for Juridica's shareholders instead of creaming off profits in the good times. More views on the Motley Fool boards here and here.

Disclosure: I am long of Alliance Pharma and short of Ocado.
Posted by MrContrarian at 01:27