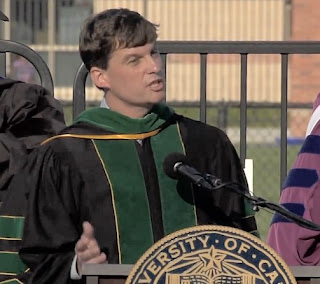 A flavour of The Big Short is in the Vanity Fair article Michael Lewis wrote about Burry and subprime crisis.
Notice how untidy his office is despite knowing a photographer was coming. He just did not care what judgement readers might make. In fact it probably did not even occur to him to tidy up.
Posted by MrContrarian at 05:54 2 comments:

After many years of attending the Master Investor Show I have never, ever 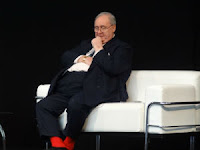 seen Simon Cawkwell standing. He is either seated within very comfortable distance of several good bottles, walking to the stage, or sitting in a two-seater sofa.

Not only did I witness Evil Knievil (EK) standing, but reading a prepared text. This is the second Miracle of Upper Street, for I have been assured by Tom Winnifrith at previous shows that it's useless to ask EK to give a presentation, he cannot be relied to write it in time.

Jim Mellon must be cracking some extra-large whip, for EK delivered a long speech complete with jokes to warm us up for his peroration. This had little to do with a history of t1ps.com.

EK laboured though his jokes like a diesel lorry up a motorway incline, mentioning Tom Winnifrith six times with varying conceits in a vain effort to repudiate the claim he had been forbidden to mutter the sacked founder's name.

"This is not going well," I thought. But soon the top of the hill was past us and he powered down into his comfort zone of shorts, malfeasance and the uselessness of our regulators.

EK boasted he is the only person he knows to have won on the capital of t1ps [Rivington], claiming he invested £1500 at the outset and sold out for £250k.
Jim Mellon eventually stepped in to save the t1ps parent, with a £3m of cold, hard cash.
EK prefers to see t1ps as the purveyor of suggestions not share tips, despite its name.

The problem with stockbrokers

One of EK's bete noirs is the stupidity of modern day brokers [compared, I imagine, to the gentlemen of good breeding he used to speak to on his Bakelite dial telephone.]


"Those over 40 are driven mad by compliance officers, those under 40 don't know anything" 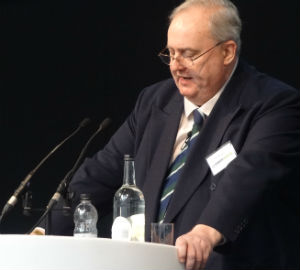 He asks readers of his diaries on t1ps to take account that their isn't enough time to take in all the morning's news and to "use their brains" when reading his online diary.

The importance of asset value

Always have the tangible asset value in mind when evaluating shares - it has to be the basis of all investments. Why buy companies that can be replicated by spending less than the equivalent capitalisation?
[As a long time fan of his I can tell you that principle has gone spectacularly wrong on occasion - ASOS (ASOS.L) and Regus Group spring to mind. He has a blind spot for brand value, perhaps because it is the hardest part of the balance sheet to quantify.]

Oranges are not the only short

Apple ($AAPL) is still brainwashing investors including 'The Debonair One'

Jim Mellon. EK again used the TNAV argument. A PE of 10 is used to argue by supporters that Apple is cheap. In his view it is still a short for the next 2 years.
He was told that Apple plan to buy a television station [really? Is he confusing Apple's rumoured launch of an actual television?].  That doesn't make any sense he asserted. It took 50 years for ITV to reach a value of £6bn and even then that's pennies compared to Apple's size.
Apple is facing more and more competition and that will push up the PE ratio.

3DM [now reborn as Environmental Recycling Technologies ENRT.L] had many accounting stories to be explained but the old management got clean away. An example of their dubious accounting: £2m was 'invested' only to ping back to the company as a 'receipt for a licence' i.e. revenue.
He blamed the FSA and its totally supine performance. The 3DM problems were relayed to it in detail and yet they did nothing.


"The bare faced tolerance of fraud is degrading."

EK has lost count of the frauds the FSA has waved through mainly through idleness and stupidity.

Major firms of solicitors turn out to be "conniving filth" when it comes to helping clients bring libel cases. There has been no punishment for failing to substantiate libel claims when challenged to do so.

It has become ever more expensive to short shares listed in New York. American banks have lost confidence in a lending US stock in London. Qihoo360 ($QIHU, an alledged Chinese internet fraud) has a borrow charge of 20% PA in London but only 2% in the US.

A recent financing innovation, the Standby Equity Distribution Agreement (SEDA) is a death spiral, an invitation to fraud.  [Also called an 'Equity Finance Facility', it involves ongoing dilution at whatever the prevailing share price is] He cites Noventa [a junior miner NVTA.L] which were at 1.5p with 100m shares in issue  When they hit problems the proper thing to do in his opinion was to liquidate the company. Instead the SEDA financer Darwin sold 500m shares (as a hedge, driving down the price?). In affect he alledged £500k was filtched from shareholder. Cash is now only 0.02 p per share. The authorities should clamp down on SEDA.

EK is staggered how the Pound holds its value.


"Our debt position is terrible and has been swept under the carpet by politicians."

The government bond markets will break and it'll be huge. Short Gov't bonds and don't delay on the grounds that we don't know when the collapse will come.

Disclosure: I am short of Qihoo360
Posted by MrContrarian at 01:04 1 comment: