A 1.25% charge to manage a bond fund targetting LIBOR + 2%? This advert doesn't even tell you the annual charge or that there's an initial fee. 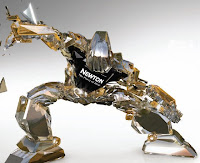 BNY Mellon have taken to using risible Iron Man style imagery to promote their Newton Global Dynamic Bond Fund, whose performance ought to be predictable and dull. Money Week (13 June) has a teaser ad (right) followed by a full page ad.
It was the dissonance between the dynamic, futuristic and exciting Crystal Man and the performance aim of LIBOR +2%* before fees that caught my attention. Woo-hoo, LIBOR plus two percent! I'm going to smash my way through concrete walls to reach that sort of return. 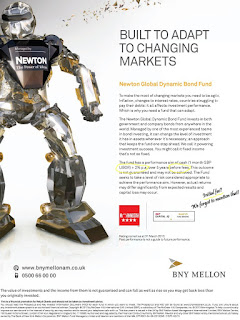 
"The Power of Ideas"

You can see that Crystal Man's chest logo is The Power of Ideas. Only the idea here is for BNY Mellon to make guaranteed easy money while you take all the risk of buying bonds at the top of a bubble market. They omit the level of the performance fee even from the feint small print. And why do they do that? Is it because it's over half the plus two percent?
Also the ad does not even say that there's an initial fee of up to 4%.

The fact sheet gives the management charge as 1.25% PA. With 1 month LIBOR at 0.2% the charge is 57% if the targeted gain.
Now the fund has done a lot better than LIBOR+2% over the last three years, averaging 5.1% PA including the management fee. 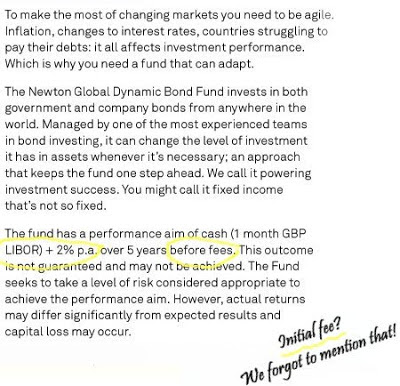 I doubt that bubble-boosted returns (these include capital gain) will continue. In 2009 the fund returned 31.6% of which 25% was capital gain. If a bond fund can make a 25% cap gain as bond prices rise that can reverse. There's a very strong chance of you losing money in this fund if you buy now, especially after the initial fee of up to 4%.
I shall ask the Financial Conduct Authority (FCA) to ban this advert unless it states the fees. It's not enough for the manager to say that you should read the documents for the fund in which you want to invest. Obviously you should but there's plenty of room to be transparent about charges in the ad. Ryanair ads got banned for hiding charges on the website.
It's a shame that the Advertising Standards Authority has no remit on financial press ads. They are much tougher and quicker than the FSA were. Will the FCA be any better?

If you see a financial advert that you think the FCA should act on, email fintrom1@fca.org.uk