Looking for Ten-Baggers is a Losing Strategy: You are not Peter Lynch

This is how I began my first ever investment article. I got a freelance spot on the Motley Fool UK in 2006 and, being a big-head, used it to attack one of the most popular ideas among small investors. I have listened with my head in my hands as friends have told me about their latest share buy, a 95% chance of failure punt wrapped in a great story.
Peter Lynch's idea, buying into a long-term growth company at an early stage, is a great one. There are 24,000 hits on Google for the phrase. How can such a good and popular idea be so damaging?

I came back to this hobby horse because of a glitch on Investors Chronicle's website. They re-published an article from three years ago but gave it last Friday's date. Tomorrow's 10-baggers chooses eight shares that could ten-bag. The article is gone from the site but here's Google's cache of it.

"The next blockbuster is just around the corner, you just have to look out for the signs – a niche but valuable product, a genuine growth market, or a recovery about to kick-start. Tomorrow's 10-baggers have already started their journey, you just have to hitch the right ride."

That sounds so straightforward. How have these potential portfolio-makers done?


Not a single share has even two-bagged in three years. The best one, Monitise, is a very good company, in a great sector. Its turnover is up 1250% in three years. But it's losing more money than ever and fundraisings have nearly trebled the number of shares in issue


"Not a single share has even two-bagged in three years."

[Edit] A comment here on this article points out that eight shares over three years does not prove anything. This is quite right. You'd need something like 100 over ten years to start getting a statistically significant result. It's a massive problem with learning to invest compared to say tennis, where the feedback is significant and immediate.
Posted by MrContrarian at 01:25 4 comments:

The Gov't has appointed Rothchild to advise on splitting problem bank RBS into a Good Bank and Bad Bank (report). The idea is to speed the recovery of the useful parts (mortgages, business lending etc) by shoving the toxic loans and some matching debt into a sack to rot and fester at the end of the garden.

Bondholders are concerned that they might have a haircut forced on them if they wake up on the wrong side of the sackcloth. It may seem unjust for the bonds, which rank ahead of preference shares, Gov't B shares and ordinary shares, to suffer a loss when the bank is solvent and whose equity still has a value of £30bn. Always remember that, when in a tight spot, the politicians' expediency card trumps all.

If bondholders in a solvent bank can be burned, why stop there? Britain is struggling to recover under a mountain of state debt, so let's split off the bits we don't want and draw a line under it (© Tony Blair).


Holders of Gilts can take an immediate 25% hit and more later if we feel like it.The Good Gov't can move ahead with reviving the economy with plenty of spending on jobs, roads and health. Income tax can be cut to 15%, corporation tax to 12%, making it the lowest in the EU. 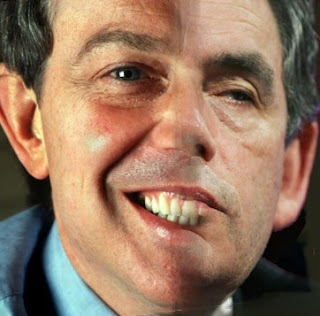 A disadvantage of the split is the need for two General Elections, one for each Gov't. Perhaps Gordon Brown and Tony Blair will come back to jointly run the Bad Gov't, tied together like bickering conjoined twins in an uncivil partnership.